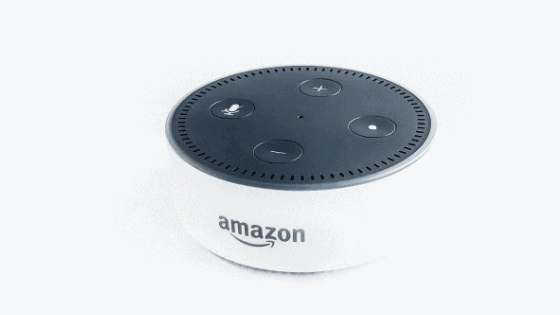 You’ve probably heard of Amazon Alexa and Echo before and wondered, “what’s the difference?”.

“Alexa” and “Echo” are often used interchangeably, but they are not the same thing.

Alexa versus Echo – What is the difference?

Alexa and Echo are not the same thing. The main difference is that Alexa is the software and Echo is the hardware. Alexa is Amazon’s AI virtual assistant technology that lives in the cloud. Echo is a product line of Amazon smart speakers that come with Alexa AI technology built in.

I think the reason a lot of people think Alexa and Echo are the same thing is because the Echo was the first product to ever use Alexa.

And to make things even more confusing, when someone says, “Hey, do you have an Alexa?”, what they usually mean is “Do you have an Echo?”.

Back in 2014, Amazon launched Alexa into the world with their first ever Echo (1st generation) smart speaker (“smart” because it came equipped with Alexa!).

This was the first time anyone had ever heard of Amazon “Alexa” or the Amazon “Echo”.

So in many ways, 2014 was a coming out party for both the Echo and Alexa, and the two have been inextricably linked ever since.

The technology behind Alexa is the real break through here.

Ultimately Echo devices are really just speakers (although some of the Echo Shows do have some great display and touch technology built in as well).

Alexa, on the other hand, is capable of:

And on top of all of that, Alexa also acts as a “smart hub”. A smart hub connects all your smart products together and allows them to interact with one another.

Using the “Alexa” app on your smart phone, you can connect any Alexa enabled smart product and create automatic routines – like turning on your porch lights at dusk or locking all your doors when your >1mile away from home.

You can also manually control those same smart products directly within the Alexa app. So, if you want to turn on your downstairs lights, you can do that by clicking them on in the app.

Most of these skills and services are entirely free, although Alexa does offer access to premium services like Amazon Prime and Spotify Premium.

But maybe the coolest aspect of Alexa is that she is always learning!

Because she uses Machine Learning and other Artificial Intelligence techniques, Amazon Alexa will only continue to improve.

I’ve personally already seen a marked improvement from the first versions of the Alexa software, and the data certainly backs this up.

With over 100 million Alexa devices sold over the past 8 years, Amazon certainly has plenty of data and feedback to work off of for the foreseeable future.

What’s nice about software is that as Amazon learns from its mistakes and updates Alexa accordingly, they can push out that update to your Echo device.

Software updates usually happen automatically, which means your Echo is always running the latest and greatest version of Amazon Alexa!

It’s also worth noting that Echo isn’t the only product to run Alexa software on it.

You might have noticed lately that just about every smart product on the market is “Alexa compatible”.

That’s because Amazon launched the Alexa Voice Service which provides non-Amazon developers tools to build Alexa directly into their products.

Amazon wants every smart product in the world to be compatible with Alexa. It’s just good for business.

What is the Amazon Echo?

The Amazon Echo, as previously mentioned, is a line of smart speaker products that connect to the AI assistant, Alexa.

The first generation Echo was tall, heavy and just all around bulky. But over the years the Echo has evolved into a smaller, far more capable, smart speaker/hub.

And while Alexa really is the technological marvel, the Echo actually does have some pretty neat tech built in.

For example, the seven-mic system that Amazon built into the Echo and the associated listening software is some most capable mic tech on the market.

After seeing the success of the initial Echo launch, Amazon really leaned into the product line and introduced the Echo Show.

The Show added a display to the Amazon smart speaker and with that display came a bunch more capabilities.

Now the Echo can play Netflix shows and movies, surf the web, pull up step-by-step recipe instructions with photos, integrate with smart cameras around the home (like baby monitors), and more.

All of the various Echo products (the Echo Show, Echo Dot, Echo Look, Echo Plus, Echo Flex, etc) continue to be the most popular smart speakers on the market today.

What smart speaker is in second place you ask? You guessed it, Google Home.

Given that both Amazon Alexa and Echo were released at the same time in 2014, it’s understandable why so many people think they are the same thing. They aren’t.

Alexa is the software that runs on Echo, the hardware.

Alexa is Amazon’s AI virtual assistant technology that lives in the cloud.

Echo is a line of Amazon smart speaker products that come with Alexa AI technology built in.

Software (Alexa) is always being worked on and can be improved over time. These improvements can be pushed to hardware (Echo) through something called a software update.

What’s nice about that is you’ll always be running the latest Alexa software.

Your hardware (Echo) on the other hand, will keep any limitations it has, and if you want to upgrade it you have to buy the latest and greatest product version.

Hopefully this has helped you understand some of the key differences between Alexa and Echo.

If you know of any other key differences I forgot to mention, leave me a comment down below!