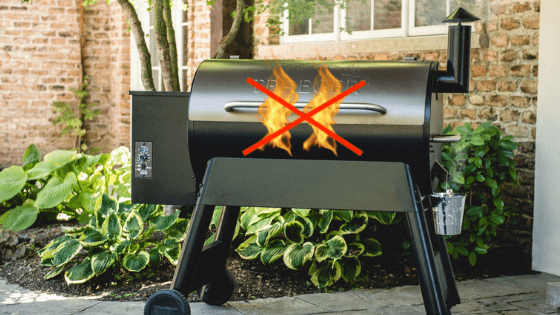 The most common reason a Traeger won’t ignite is a dirty Fire Pot. Confirm your Fire Pot is clean, then make sure the hot rod is producing heat. If it isn’t, replace it. If it is, adjust the hot rod so that it comes out further, towards the center of the Fire Pot.

Here’s a more detailed summary of how to fix a Traeger grill that won’t ignite.

The Fire Pot is a common cause of Traeger’s not igniting, so that’s where we will start troubleshooting.

Start by removing the lower and upper grill grates, the drip tray, and finally the heat baffle. Underneath the heat baffle, in the center of your grill, is the Fire Pot.

This Fire Pot needs to be clean, otherwise your Traeger will have trouble igniting.

If you see too many pellets inside, or sawdust starting to clump up and cake on the sides, then it is time to clean it!

You can use a butter knife to scrape the sides of the pot, knocking off any build-up. Once you finish that, use a shop vacuum to vacuum out the debris.

Hint: try not to suck out the pellets from the augur, otherwise you’ll have to re-prime it!

Going forward, make sure you are using high quality pellets. Your pellets should be solid, dry and shiny, not damp or crumbling. If your bag of pellets got wet, or it looks like sawdust, just throw it out.

If your Fire Pot is nice and clean, the second most common cause of a Traeger grill not igniting is a malfunctioning hot rod.

The function of the hot rod is to ignite the wood pellets at the bottom of the Fire Pot, making lighting your Traeger grill easy.

If, for some reason, the hot rod malfunctions and stops heating up, your Traeger won’t ignite. Replacing the malfunctioning hot rod will undoubtedly restore your grill’s functionality and make igniting it easy.

Note: if your hot rod is producing heat (i.e. not broken), consider sliding it slightly out, deeper towards the center of the Fire Pot. Traeger recommends this when the hot rod works, but the grill won’t ignite. The process is pretty straight forward:

How to check a malfunctioning Traeger hot rod

How to replace a damaged Traeger hot rod

If your Traeger grill’s hot rod has malfunctioned, there is no other option but to replace it. The good news is that replacing a malfunctioning hot rod does not have to be complicated.

Here are the steps:

Sometimes your Traeger won’t ignite if the draft induction fan is not spinning or working appropriately.

In case you didn’t know, your grill has an induction fan under the hopper that circulates air into the Fire Pot. Adequate airflow in the Fire Pot makes it easy to ignite the grill and stock the fire.

If the draft induction fan is not spinning appropriately, your Traeger grill will probably not ignite.

The draft induction fan may stop spinning if you haven’t used your grill for a while or because of dirt or grease build-up.

The fan may also stop working due to entanglement with the wires underneath the hopper.

The easiest fix is to give the induction fan a couple of spins to boost its momentum. If the problem is due to dirt or grease build-up, clean the fan thoroughly to get it going again.

You may also want to get any wires out of the way to ensure that the fan has adequate space to spin without any obstructions.

How to test a Traeger draft induction fan

Testing if the draft induction fan is the problem is pretty straightforward. After all, the fan is underneath the hopper and is easy to see and access through the perforated plate covering it.

Here are the steps on how to test the induction fan:

How to replace a draft induction fan that won’t spin

Draft induction fans rarely get damaged. In most cases, they stop spinning because of grease or dirt build-up or as a result of entangled wires.

If the draft induction fan of your grill has stopped working, you may need to replace it lest your Traeger won’t ignite. Here are the steps on how to go about it:

Sometimes the draft induction fan could be functioning well, but the motor is the problem. If this is the case, order a replacement by calling Traeger customer service or visiting their website.

Here are the steps to installing a new fan motor:

If everything seems to be working fine, but the Traeger grill still won’t ignite, consider checking the pellet auger for issues. A jammed or clogged auger can prevent your grill from heating up.

Your grill may not start or even stop working if the auger is not feeding pellets to the Fire Pot due to a jam. The most common cause of an auger jam is wet pellets.

Exposing your wood pellets to moisture will cause them to expand and block the auger shaft.

Fortunately, fixing this issue is not a big deal. All you have to do is clear the jam, and your grill will fire up within no time.

For this task, you’ll need the following tools:

Use the following steps to clear a jammed auger and get your grill firing up back again:

As you can see, fixing a Traeger grill that won’t ignite does not have to be overly complicated. You only need to:

Let me know in the comments if any of the above tips helped you fire up your Traeger grill.