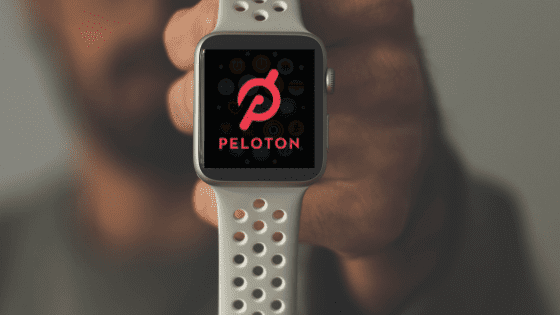 The Peloton Bike and the company behind it are global sensations – to date, Peloton has sold more than 2.3 million units.

Even more popular than the Peloton Bike is the Apple Watch, purchased by more than 33 million people in 2020 alone.

Naturally, there are a lot of crossover customers for these products, leading to many fitness-minded people wondering if they can use their Peloton and Apple Watch together.

While there are limits to the types of workouts you can track, Peloton does offer an Apple Watch mobile app. When you have the app on your watch, you’re able to track your calories, heart rate, and more. You can also connect your watch via GymKit to the Peloton Bike+.

Continue reading for a complete breakdown of all the ways the Apple Watch works (and doesn’t work) with Peloton!

Can you Connect Apple Watch with Peloton?

Peloton has a mobile app with versions for every Apple device, including the Apple Watch.

When you have the app on your watch, you’re able to connect it for workouts to track your calories, heart rate, and more. You can also connect via GymKit to the Peloton Bike+ (more on that below).

There are a lot of exceptions to that statement, though, hence the length of this article.

There are limits to what type of workouts you can track, which Apple Watch OS will work, and more. Each section of this article is designed to walk you through the ins and outs of using your Apple Watch with Peloton.

Does every Apple Watch work with Peloton?

This is a common concern for people who own and use older generations of popular technology.

For example, if you’re still rocking an iPhone 8 or older, new apps often don’t work for you. But, is the same thing true for Apple Watches?

Until the release of Watch OS 7 in September 2020, every Apple Watch that had been released was still supported by new updates.

But, when Watch OS 7 was released (and soon replaced by Watch OS 8), the two earliest Apple Watches – the Series 1 and Series 2 – became obsolete.

There is good news, though: Peloton still allows members to use older Apple Watches, because it is still compatible with Watch OS 6, aka the final software update for old Apple Watches.

So, while you may want to replace your Series 1-2 Apple Watch soon, it’ll still work with Peloton for now! Just make sure your Apple Watch is using Watch OS 6 or higher.

Different ways to use your Apple Watch with Peloton

This is something that trips up a lot of Apple Watch users, and even threw me for a loop the first time I dug into this topic for myself.

There are two separate ways to use an Apple Watch with Peloton:

These two connection methods function roughly the same, with your Apple watch tracking some of your workout data and syncing it to the Peloton App on your phone/to your workout equipment.

But, depending on which Peloton Bike you have, and which type of workout you are doing, the connection method you should choose changes.

How to pair your Apple Watch with the Peloton Bike+

Apple Watch has a feature called GymKit that allows you to connect it directly with compatible workout equipment, including the Peloton Bike+.

If you have the standard Peloton Bike or the Peloton Treadmill, you’ll have to skip this section, as GymKit only works with the Bike+.

Pairing your Apple Watch to Peloton with GymKit is a simple process, but it isn’t exactly intuitive.

After you learn how to do it, you’ll never forget, but the first time you connect your Apple Watch to your Peloton Bike+ can be confusing.

Your Apple Watch will automatically disconnect from the bike when the workout finishes.

Tension between Peloton and Apple

It may seem strange at first, but Peloton and Apple have a bit of drama in their recent history, and it’s causing headaches for some customers.

What started as a luxury indoor cycling brand has begun to grow – and in some ways, compete with Apple.

Peloton now offers a wide range of classes, including strength training and yoga, in addition to their more widely-known cycling classes.

In addition, Peloton has expanded its product line to include treadmills, weights, and heart rate monitors.

In the future, they’re expected to release even more products, including a specialized Peloton Smart Watch. In fact, Peloton purchased two companies in 2020 that, coincidentally, both make tech related to smartwatches.

It’s clear that Peloton’s future plans have little to do with Apple Watch compatibility – they want users on their own proprietary watches instead.

What does all this mean for you?

As an Apple Watch owner, it means you can expect less and less functionality from your Apple Watch when you use it with Peloton, as the fitness company ramps up its wearables business.

Peloton’s plans for the future is what creates the tension between Apple and Peloton.

As Peloton adds its own devices and expands its offerings, GymKit connection, and Apple Watch connection as a whole, are going to become less and less important.

This is already starting to happen – early in 2021, Peloton removed GymKit compatibility from some Bike+ classes. Peloton blamed Apple for having tech that couldn’t keep up, but the real loser in the situation was the customer.

Which Bike+ workouts are compatible with Apple Watch?

The lack of functionality may not be entirely the fault of tension between the two companies, however.

When Peloton was still primarily a stationary bike company, the GymKit concept worked perfectly: just connect your watch, work out, and track your data seamlessly.

When Peloton added weight training, yoga, and more to their offerings, the GymKIt became harder to use.

This is because Apple’s GymKit only works with compatible devices – it’s useless the moment you step off the bike or treadmill to do a different part of the workout.

So, when you’re doing bike-only classes on your Peloton Bike+, you can use GymKit flawlessly.

The Peloton App for Apple Watch

Peloton sells a spin-off membership product called the Peloton App, and it’s exactly what it sounds like: an app with a large library of workouts and videos.

The Peloton App is free to those who already own a Peloton Bike or Tread, and it costs $12.99/month for those who do not.

The Peloton App has a wide range of different workouts, from Yoga to outdoor running and cycling. It’s similar to the Bike+ in that, although it’s Peloton, it’s a full-body, multi-disciplinary product.

The Peloton App has an Apple Watch component, but don’t expect too much.

The Apple Watch component of this app is there mostly to track your heart rate and data fields as you work out. You can’t start, end, or view workouts with the watch – you have to use your phone.

If you want to use your Peloton Membership, you should know that 98% of its functionality happens either on the Bike, Tread, or your phone.

The Apple Watch app is just there as a complement to the phone app.

Can you connect an Apple Watch to the original Peloton Bike or Treadmill?

The short answer is no, there is no way to directly pair an Apple Watch to the standard Peloton bike, and the same is true for the Peloton Tread.

There are some third-party Apple Watch apps that will turn your watch into a heart rate monitor for Peloton classes, but that’s it.

Peloton, much like other cycling technology, can only connect to monitoring sensors through ANT+ technology, which is not native to Apple Watches.

So, unless you have the Bike+, you won’t be able to connect your Apple Watch directly to your Peloton machine (though you can still use the app).

An alternative to pairing Apple Watch with Peloton

Let me start by saying this isn’t exactly the most seamless approach to working out with Peloton and tracking it with an Apple Watch. If anything, it’s a bit clumsy and can be annoying.

But, when you aren’t able to pair your Apple Watch during non-cycling Peloton Bike+ classes, it might be your best bet.

Instead of pairing your Apple Watch, you can start a fitness activity (like a HIIT workout) separately so that your heart rate, blood oxygen, and calories are all tracked independently.

This way, when you hop off your bike and grab the free weights during your Peloton Bike+ class, you’re able to continue tracking basic fitness stats.

You also need to make sure you aren’t duplicating the information recorded during your workouts.

For instance, if you connect your Apple Watch to Strava, and do the same with Peloton, you’ll wind up with two different Strava activities for the same workout. Deleting the duplicate workout is easy, though – you just have to remember to do it.

Can you use Apple Watch during Peloton Yoga and strength training classes?

No. Unfortunately, the Apple Watch GymKit feature only works with Peloton classes that begin and end on the Peloton Bike+.

When you try to connect your Apple Watch during a more complex workout, it won’t work.

The reason this happens is so that your Apple Watch isn’t left behind when you stop using the connected equipment.

Once you get off of the bike or treadmill to do another exercise, a paired Apple Watch will have nothing to do, so Apple/Peloton simply removed this functionality for these types of workouts.

Can you use Apple Watch during live Peloton classes?

When you join a live class, all you have to do is wait to pair your watch until there is less than 1 minute on the class countdown. If you pair it before that, the connection will time out and drop, forcing you to reconnect. Once your class is over, your Apple Watch will disconnect automatically.

Does Peloton pair with other smart watches?

Just like with the Apple Watch, you are able to use the heart rate monitor on your Garmin watch, or any other fitness watch that has ANT+ technology.

If it does not, such as with the FitBit and Apple Watch, you won’t be able to pair it to your Peloton for heart rate monitoring.

What Data Does Apple Watch Track During Peloton Workouts?

Here’s a brief rundown of what you can track with your Apple Watch when it’s paired to your Peloton bike:

Of course, all the data that your Peloton bike or treadmill tracks will be visible on your screen or on the mobile app, even if you cannot see them immediately on your watch.

If you’ve gotten the sense that using your Peloton bike and Apple Watch together is more complicated than it should be, I agree.

There are more limitations and exceptions to using these two products than there are hard and fast rules.

That said, your Apple Watch can still be an indispensable part of your Peloton workout regimen – as long as you know when to pair it and when not to.

Also, if you’re a Peloton lifer, be on the lookout for their smartwatch in the coming months – you may want to put your Apple Watch to bed once it releases!

Good Home Automation is where over 3 million people a year come for accurate, to-the-point answers to all their tech related questions. I hope you find what you’re looking for!