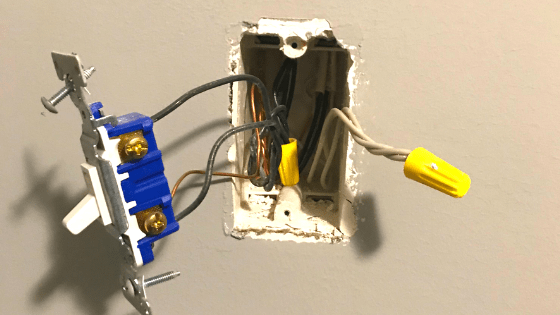 It’s best to keep things simple when learning about your home’s electrical wiring for the first time.

But not too simple, you don’t want to kill yourself.

What is a neutral wire?

You can think of a circuit as a giant loop. Electricity must be able to constantly flow around it in order to provide power. Any interruptions to this loop and the flow of electricity stops. A neutral wire helps to complete this loop by bringing current (electricity) back to the power supply, completing the circuit and keeping the power on.

That’s the main purpose of a neutral wire, to serve as a pathway for energy to return back to the original source.

A load is anything that uses electricity or draws power. For example a lamp, a toaster, or your wife’s curling iron.

In North America homes use “split phase 240 volt current”. Which just means that each of the hot wires carry 120 volts, for a total of 240 volts.

When the loads on the two hot wires are imbalanced (as they usually are), the neutral wire carries the difference back to the power supply.

For example, if one of the hot wires is carrying 12.5 amps and the other is carrying 15 amps, the neutral wire will carry 2.5 amps (15 amps-12.5 amps) back to the power supply, completing the circuit.

If, however, only one of the hot wires is carrying a current of 15 amps, the neutral wire will carry an equal 15 amps back to the power supply, completing the circuit.

In the event that both hot wires are carrying the same current, the neutral wire will carry no electricity back to the power source. In this case the circuit is completed by the electricity moving back and forth between the two hot wires.

Therefore “ground” wires, unlike neutral wires or hot wires, do not carry any electrical current under normal circumstances. They are only used in the event a ground fault.

For instance, your house is struck by lightning. This would likely cause a ground fault. In this scenario, the ground wire would take that abnormal current of electricity produced by the lightning and send it into the earth. It would also trip a breaker switch at your electrical panel, killing any further electricity to your home.

Without the ground wire your TV, or refrigerator, or god forbid your wife’s curling iron, could blow up. And that would suck.

Do I have a neutral wire?

The easiest way to determine if you have a neutral wire in your light switch box is to look, but here are a few clues if you don’t feel like doing that just yet:

Warning: Before you go ahead and investigate your light switch make sure your power is off! Go to your electrical panel and flip off the breaker that powers the light switch your working on.

Once you’ve done that go back to the light switch and try to turn the light on. If it doesn’t turn on you’re good to proceed.

You should be able to identify each wire fairly easily. I had no experience doing this before and found it to be straight forward.

1) Hot wires are black and/or red and/or white.
2) Neutral wires are white or gray and are usually joined with a wire nut, not connected to the light switch!
3) Ground wires are bare copper or green

You’ll know you have a neutral wire if there is a coil of white or gray wires behind the light switch, not connected to the switch.

If you don’t have a coil behind the light switch, you probably only have three wires – a black, white and copper wire. In this case, you don’t have a neutral wire (even though one of the wires is white!).

Once identified, the best advice I ever got was to use some masking tape and label each wire before taking them off the light switch. You can even take a picture on your phone just in case so you know how it was installed.

You don’t want to find yourself in a situation where you’re forced to call an electrician because you can’t even connect the original switch.

Why is a neutral wire required?

Some circuits simply cannot function without a neutral wire, others don’t need one. For example, the standard light switch in your home. It doesn’t consume any power, it only connects the power to the respective bulb(s).

The majority of smart light switches on the market do require a neutral wire, but there are some that don’t. The downside of these switches is they require a separate hub which you have to purchase.

What to do if I don’t have a neutral wire?

If you don’t have a neutral wire you have three main options:

You could hire an electrician and have him/her run a neutral throughout your house. But you’re probably not looking to get this involved. It can be expensive and just an overall pain in the butt.

Buying a smart light switch that doesn’t require a neutral wire is an easier and more affordable option. There are several options out there but in my experience the best is the Lutron Caseta Smart Home Dimmer Switch. It get’s amazing reviews and is easy to setup yourself.

Lastly you could just use smart bulbs and avoid the hassle of smart light switches all together. However, there are some downsides to smart bulbs. The biggest being that they simply won’t work if your light switch is ever switched off. Which means you need the light switch to always remain in the on position.

That can be a real pain for you and your family and a hard thing to remember. My belief is that smart home automation should add functionality on top of what already exists today, not eliminate it.

Not being able to use your light switches in your house doesn’t sound all that smart to me.

Don’t get me wrong, there are use cases for smart bulbs, they just aren’t my first choice.

Why does my neutral wire have voltage?

We discussed earlier that the primary job of the neutral wire is to serve as a pathway for energy to return back to the original source. And in the case of the smart light switch, the neutral wire also provides power so that the switch can always be “on“.

Therefore, if this wire has voltage that means it’s doing its job! But be careful, this obviously indicates that you have not killed the power to the switch you’re working on. Go to the electrical panel and switch off the breaker.

If you’ve already turned off the breaker and your neutral still has voltage call an electrician before proceeding. More likely than not there is an issue you’re going to need a professional to resolve.

Can neutral wire be connected to ground?

I see this question, can a neutral wire be connected to a ground, pop up a lot in search forums. The answer is NO. Neutral and ground wires are not interchangeable!

It can be extremely dangerous attempting to use ground or neutral wires for any purpose other than their intended use.

As discussed earlier, ground wires are not meant to carry any current under normal conditions. They are only used as a safety precaution when an abnormal charge is experienced.

By removing the ground, or tampering with it in any way, you run a very real risk of electrocution.

Working with your home’s electrical wiring can be intimidating, and for good reason. The stakes are high.

Now that you know what neutral, hot and ground wires are, and how to identify them, you have what you need to get started.

Just make sure the right breaker is switched off at your electrical panel.