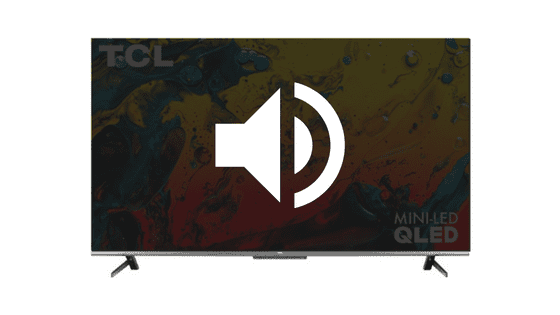 For some reason most TCL TVs eventually run into a similar problem where the sound works, but there is no picture.

There are countless cases of TCL TV owners who say they’ve had this problem. Luckily there is a very easy fix that should resolve about 50% or so of TCL TVs with sound but no picture.

TCL TV with sound but no picture

If your TCL TV has sound but no picture, you need to reset it. Unplug your TV and wait a full 60 seconds. While the TV is unplugged, press and hold the power button for 30 seconds. After the 60 seconds are up, plug your TCL TV back in.

While this fix sounds incredibly obvious, unplugging your TCL TV from the wall outlet is the most common way to get the picture back and working again.

The key here is to actually wait the FULL 60 seconds. Have some patience and make sure it’s been at least a full minute before plugging it back in.

This will help to drain any residual power left in your TV’s capacitors and allows the TV to soft reset itself. This is much different than simply switching the TV on and off with the remote.

While this fix should work for about 50% of cases, the remaining 50% can be a bit trickier. If you’re still having trouble getting your TCL TV picture back, read on.

If power cycling your TCL TV didn’t do the trick, then the very next thing you should check are your HDMI connections.

With the rise in popularity of HDMI streaming devices like Roku and Firestick, more and more TCL TV owners are reporting that their TV has sound, but no picture. And it’s often due to a bad HDMI connection.

Then grab your TCL TV remote (NOT your Roku or Firestick remote, if you’re using those) and click SOURCE (or INPUT). You’ll likely need to toggle this several times until you find the corresponding input on your TV

If the connection is secure, and you’re on the correct input, I would try connecting to a different HDMI port. TCL TVs often have multiple ports, sometimes up to four! Use a different port and see if you get the picture back.

If your TCL TV is on and you hear, but there is not picture on the screen, it’s possible that one of the LED power strips on the backlight is faulty.

To troubleshoot the issue, make sure the TV is powered on. Then take a flashlight (the flashlight on your phone will work too) and shine it close to the TV’s screen. I suggest turning off all the lights so it’s easier to see.

NOTE: while some of a TV’s components are easy and cheap to replace on your own, disassembling a TV will likely void the warranty. If your TV is still under warranty, I suggest contacting TCL for further assistance.

Below I’ll cover some of the components that are most likely to cause the black screen you’re seeing.

There’s also a chance the entire panel is broken. In which case buying a replacement screen is costly and usually not worth it.

Buying a brand-new TV is often cheaper than paying for a panel replacement. But it’s rare for a TV’s panel to break, unless it’s been physically damaged by force.

If your backlight is working fine, then you most likely have an issue with the screen of your TCL TV.

Problems with the screen are a lot trickier to solve because there are a handful of different components inside the TV itself that could be causing it.

The most likely culprits are the the T-con board, Cof-IC or Scalar PCB (power control board).

If you’re handy, you can take off the back panel of your TCL and try to replace these components yourself. But you’re probably better off hiring a trained TV technician to do the work for you.

Keep in mind that the screen size will make a big difference on cost and whether or not a repair makes financial sense.

Repairing a TV that is 32″ or less is rarely worth the repair because of the labor costs involved (just because the screen is smaller, doesn’t mean it takes any less time to fix it!).

These days, buying a brand new TV is likely your best bet, unless you can do the work yourself.

Another option you can try is calling the TCL television support line at 1-877-300-8837. Here are their hours of operation:

The TCL support staff are trained to deal with television problems like this, and have likely received many similar “sound but no picture” complaints in the past.

They should be able to walk you through some troubleshooting steps to determine whether or not this is something you can fix yourself or if you’ll actually need to send it in.

At least taking this step will give you peace of mind that you tried everything you could to fix it.

As a last ditch effort it might be worth looking into whether or not your TCL TV is covered under warranty.

If you do decide to look into this, here is all the warranty information you’ll need.

Most TCL TVs are covered under a limited warranty for the first year of ownership.

The warranty covers: “Defects in materials or workmanship to the original owner of this TCL product when purchased as new from an Authorized Dealer“.

Basically if they decide that the issue is covered, they will pay for your TV to be fixed or they will buy you a new one.

More likely than not you’ve had your TCL TV for over a year, but if not it’s worth a shot!

If your TCL TV has sound, but no picture, don’t panic, there are several proven fixes you can try to get things back up and running:

Hopefully one of these fixes worked for you. Were you able to get the picture back on your TCL TV? If so, let me know how in the comments below!