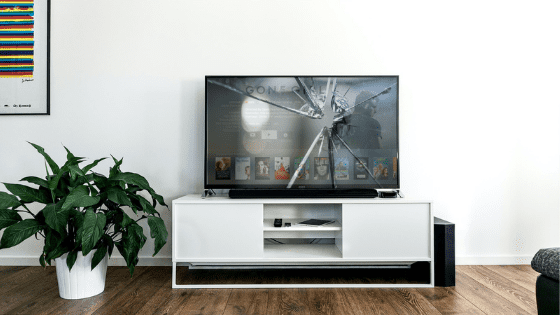 One of the worst, if not the THE worst, things that can happen to your TV is a cracked screen.

If you were moving your TV and dropped it, or one of the kids threw a toy at it, you’re probably wondering how to fix a broken TV screen.

Unfortunately, in most cases, you cannot fix a broken TV screen. TV manufacturers do not sell screen replacements, and there is no secondary market for used screens. That’s because the screen is the most expensive part of the TV, by far. Replacing it would cost more than buying a new TV!

In many cases, your local electronics or TV repair shop won’t even consider working on your broken TV screen. They know that it’s just not worth their time.

So take a hint from the pros, and don’t even bother trying to fix it yourself.

Why TV screens cost so much

To better understand why your TV screen costs so much, let’s take a brief look at the manufacturing process and what’s involved.

If you bought your TV recently, chances are incredibly high that it came from China. Specifically, the BOE Technology factory in Hefei, the capital of China’s Anhui Province.

The BOE factory, where most US TV screens are made today, is almost a mile long and cost about 7 BILLION dollars to build! Sony, Samsung, LG, Vizio, etc. all buy their TV screens from BOE.

The process to build a TV screen is incredibly complex. Take an LCD screen for example:

“Liquid Crystal display screens are made by putting two thin sheets of glass together. On one of the sheets transistor “cells” formed by first depositing a layer of indium tin oxide (ITO), an unusual metal alloy that you can actually see through. That’s how you can get electrical signals to the middle of a screen.

Then you deposit a layer of silicon, followed by a process that builds millions of precisely shaped transistor parts. This patterning step is repeated to build up tiny little cells, one for each dot (known as a pixel) on the screen.  Each step has to be precisely aligned to the previous one within a few microns. Remember, the average human hair is 40 microns in diameter.”

It literally takes thousands of engineers to keep the place running.

This is the number one reason your TV screen is so costly – they are incredibly challenging to build, and as a result there are only a few companies in the world that make them.

I’ve also heard that only 1 out of every 3 TV screens pass testing at the END of the manufacturing process. That means 2 out of every 3 screens made are worthless!

Another contributor to tv screen cost is shipping.

The screens are made in China and then have to be shipped across the world to be sold in the US. The cost to ship them is high, and a lot of damage can happen during the journey.

So the complexity, and shipping both contribute to the high cost of TV screens. It’s why no one sells the screen separately, it just doesn’t make financial sense.

The rest of your TV is made of inexpensive plastic and circuit boards.

If a new TV costs 1000 dollars, 800 dollars is what the screen costs, and maybe 200 dollars for the plastic and circuit boards.

Does my warranty cover a broken TV screen

If your TV screen has an imperfection, discoloration, lines, streaks, spots, etc., then there is a good chance that your warranty will cover it (if it’s within the allotted time period). Most TV warranties are in place for the first year, and they cover these types of manufacturer defects.

And the even better news here is that the majority of issues you’re likely to encounter with your TV will happen within the first year (when you’re covered by the manufacturer).

However, if your screen has an actual break or crack, you’re most likely out of luck. Even if it happens within the first year of ownership.

That’s because TV warranties have a section that identifies what manufacturers will NOT cover, which more likely than not includes the following:

I know this isn’t what you wanted to hear, but if your TV is broken or cracked, you’re probably stuck buying a new TV.

Don’t even bother calling up a TV repair person. 99% of them won’t even look at your TV if it’s broken because they know it’s not worth their time.

How to get rid of a broken TV

So now you’re stuck with a broken TV. What’s the best way to get rid of it?

You can always try selling it. Your broken TV isn’t worth much, but to the right person, it’s worth something. Someone who knows what they are doing will take your TV apart, and sell off each individual piece.

The speakers, circuit boards, LED strips, etc. Anything that is working can be sold off eventually.

Technically, you could do this yourself, but it’s time consuming and you risk damaging the parts. I wouldn’t bother. Instead, try listing the whole TV for sale. Getting something for a broken TV it is better than nothing.

Here are some great places to try sellng your broken TV:

If it turns out no one is willing to buy it, you can try listing it on those same marketplaces for free! Tons of people usually respond when they can get something for no cost, even if it’s broken.

If that doesn’t work either, just go ahead and dispose of your broken TV. But do it properly!

Here are several easy ways to dispose of a broken TV:

Whatever you do, don’t be that guy that drops his broken TV off at a donation center or clothing donation box on the side of the road.

Spend a bit of time disposing of your broken TV the right way!

How to prevent a broken TV screen

Even better than trying to fix a broken TV screen, is preventing it from breaking in the first place!

There are a number of different ways you can limit the risk of your TV screen breaking. You can:

None of these preventative steps are perfect, but if you do all three, the risk of your TV breaking in the future will be greatly reduced.

Unfortunately, in most cases, you can’t fix a broken TV screen. That’s because the screen is the most expensive part of a TV.

Screens cost so much because they are incredibly complex to manufacture, and they are shipped to the US all the way from China.

Most TV repair shops won’t even bother trying to fix a broken screen. In the end, between a screen replacement and the repair costs, you’d spend the same amount for a brand new TV!

If your TV is cracked or damage because of something you did, your warranty is unlikely to cover it. In that case, consider selling your broken TV or disposing of it.

I know this probably wasn’t the news you wanted to hear, but it’s time to buy a new television!