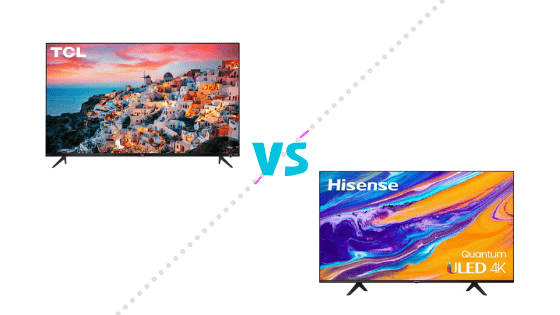 When it comes time to buy a new TV, most people are quick to recommend reputable brands like Samsung or LG. But these brands can be quite expensive and outside of many people’s budget.

Other brands, like Hisense and TCL, offer much more budget-friendly options. These companies intentionally target the “middle market” for TV and electronics!

Which leads us to the question, if you’re looking to buy an entry-level, or mid-range TV, which brand is better? Hisense vs TCL!

While close, when it comes to Hisense vs TCL, TCL TVs are better because their models have superior color accuracy, clarity, motion handling, and response times. They also tend to be a bit cheaper. In addition, TCL TVs use Roku for streaming, which many find more user-friendly than Android TV.

When you compare a Hisense TV side-by-side with an equivalent TCL model (same price, launch date, size, panel type, etc) the TCL usually stands out due to better color accuracy.

In short, if you’re struggling to decide between a Hisense TV or a TCL, I recommend the TCL.

That said, both Hisense and TCL have a great selection of TVs for a wide range of budgets. When it comes to buying a budget-friendly 4K TV, the choice usually comes down to one of these two brands.

Hisense also has OLED TVs, something that TCL has yet to release.

These brands not only have a wide selection of entry-level TVs, but also several high-end models.

For example, Hisense has a ULED 8K 75” TV that rivals most Samsung and LG TVs for a slightly cheaper price. TCL also has a 75” 8K Mini-LED QLED TV.

Having said that, the majority of Hisense’s and TCL’s TVs target the middle market.

Comparing Hisense vs TCL is tricky because both of these companies offer a wide variety of TVs with a wide range of sizes and features.

To make matters even more complicated, Hisense and TCL source their panels from many of the same providers. In some cases, the only noticeable difference between a Hisense TV and a TCL TV is the operating system.

To make an informed decision, you need to consider several factors, such as your preferred TV size, price, operating system, picture quality, and other features.

I’ll compare Hisense and TCL’s most popular features below, and you can decide which one suits you best. It’s not easy to provide an overall comparison across the board. Nevertheless, some key features are worth talking about.

Bear in mind, the differences are usually quite small, and the average TV watcher may not even notice them.

Hisense’s new TVs use Google’s Android TV as the operating system. There are some Hisense TVs that use VIDAA OS too.

Android TV includes access to the Google Play store that you can use to download a wide variety of apps directly to your TV. It’s essentially the same software found on Android phones but adapted to smart TVs.

Android TV also has a built-in Chromecast feature, allowing you to easily cast media to the TV from any Android device. Not to mention Google’s voice assistant.

Furthermore, Android TV is usually the first to gain access to new media streaming apps, and practically all of them are available on the Google Play store.

*There’s also the possibility to side-load APK files to an Android TV, although that’s not recommended.)

TCL TVs are powered by Roku TV, although some of their new models also use Google TV.

Roku OS was designed specifically for streaming media on a TV. The software uses Roku’s app library which includes almost all of the major streaming apps such as Netflix, Amazon Prime, Hulu, Apple TV, and many others.

However certain apps are not currently available on Roku, so in that regard, Android TV would be the winner.

The Roku OS uses the Miracast technology for casting media which is a bit different than Chromecast. What’s interesting is Miracast is also builtin into Windows, so you can mirror your computer screen to a TV running Roku OS over the local area network.

Most TV reviewers agree the user interface on the Roku is easier to navigate and it’s a lot more responsive than Android TV.

It really boils down to which operating system UI and features you prefer. I personally like Roku TV more, but Android TV is also a fine choice.

If you like Roku, choose a TV from TCL. Likewise, if you are used to the Android TV operating system, then a TV from Hisense will be right up your alley.

Ultimately, I would not base your decision to buy a TCL or a Hisense TV on the OS alone. That’s because you’re not limited to just one of these operating systems.

Maybe you prefer Fire TV over both Google TV and Roku. No problem, use a Firestick! You can even use multiple streaming sticks on a single TV to easily switch between these platforms.

You get the point. Your TV’s OS isn’t really a limiting factor these days.

Currently, Hisense produces TVs using a wide variety of technologies, such as ULED, Mini-LED,  OLED, and even Laser TVs. However, most of Hisense’s TVs are basic LED LCDs.

TCL has not yet launched their OLED TVs but they have QLED and Mini-LED models. It’s rumored that TCL will launch its OLED lineup sometime in 2023.

TCL also has plenty of LCD TVs for budget-friendly prices.

When most people consider a Hisense or a TCL TV, they’re usually looking for a budget-friendly 4K LCD model, and both of these brands have plenty available.

Bear in mind, most of the differences listed below are hard to spot, unless you’re particularly sensitive. Most people will be happy with a TV from either of these companies.

If you’re upgrading from a 1080P TV, the jump to 4K will look incredible regardless of which TV brand you choose. Having said that, one company does have a slight edge over the other.

Once again, these opinions vary depending on the models you compare. In some cases, the conclusions are reversed.

However, these are more general comparisons, comparing the most closely matched TV models from both brands.

TCL also has good blacks, but the deep blacks are more noticeable on Hisense TVs.

Naturally, for the deepest blacks, you should choose an OLED panel. However, even Hisense’s UHD LCD TVs offer decent black levels.

When it comes to peak brightness, Hisense’s TVs beat TCL models. Most of them are brighter than TCL TVs.

Bear in mind, brightness is not necessarily a very important factor, unless you watch TV during the daytime.

I did notice bright scenes appear a little oversaturated on the Hisense TV models. Hisense TVs are good for watching movies during the daytime in brightly lit rooms.

Most people agree the clarity on TCL TVs is slightly better than their Hisense counterparts.

To notice the differences you will need to compare the TVs side by side.

Hisense’s clarity is great too, but TCL has a slight advantage in this department.

While it’s very hard to tell the differences, the color reproduction on TCL TVs is usually slightly more accurate than Hisense TVs.

If you want your TV to have as accurate colors as possible you can consider getting a professional color calibration done on your display.

The reason for the improved colors on TCL TVs also could be due to TCL’s HDR brightness. TCL wins in this category.

Hisense tends to have better local dimming when compared to similar TCL models.

When comparing Hisense and TCL Mini-LED TVs, the local dimming is almost identical, with Hisense taking a slight edge with more zones.

Bear in mind, most budget-friendly 4K LCD TVs do not have any dimming options available.

If you play a lot of games on your TV, either on a console or a PC, this section is for you.

These features won’t matter much for casual movie watching because they’re barely noticeable.

Not many Hisense TVs offer G-Sync.

Not much to say here – Hisense and TCL both have TVs with the same refresh rates, their most recent lineups support 120 Hz refresh rates at 4K.

Having a TV with low input lag can give you a competitive edge in online games. It’s the time it takes for your inputs to register on the screen.

Once again, the numbers are very close, but TCL wins with a slightly lower input delay. If you are a competitive gamer, a TCL TV is a good budget-friendly option.

Response time is not the same as input lag, although they’re often grouped together.

Response time is the time it takes for the display to change colors, usually from white to black. If your TV has a high response time, you’ll often notice artifacts like ghosting which can be bothersome.

Most of the time, TCL TVs beat Hisense in the response time department. The difference is usually a few milliseconds. Having said that it’s unlikely that you’ll see motion blur, ghosting, and other strange artifacts on a TCL TV.

Having said that, Hisense has a handful of TVs that offer incredibly fast response times, particularly the OLED panels, such as the Hisense 55PX, which has a 1 ms response time.

Most TVs don’t have great speakers, but in this comparison, I have to say to TCL TVs have much more powerful speakers than the Hisense models.

Having said that, I still recommend buying a soundbar because a soundbar will always offer better audio than any built-in speakers.

Most Hisense TVs have a larger remote with more features than the TCL models.

With the Hisense remote you usually have a dedicated button for Google Assistant, making it easy to use the voice activation features. It also has a number pad and a few dedicated buttons for popular streaming apps.

TCL remotes use the minimalist Roku style without a number pad and usually four dedicated buttons for apps.

While it’s close, when it comes to Hisense vs TCL budget-friendly 4K TVs, I have to say the TCL lineup is slightly better than Hisense.

TCL models have better color accuracy, clarity, motion handling, and response times. They also tend to be a bit cheaper.

My recommendation is to find a way to compare a Hisense TV to a TCL TV side-by-side, ideally at an electronics store, as it will be much easier to spot the differences.

Having said that, Hisense TVs are by no means bad, they make some great TVs! It’s just that TCL’s models have an ever so slight edge in several key categories.