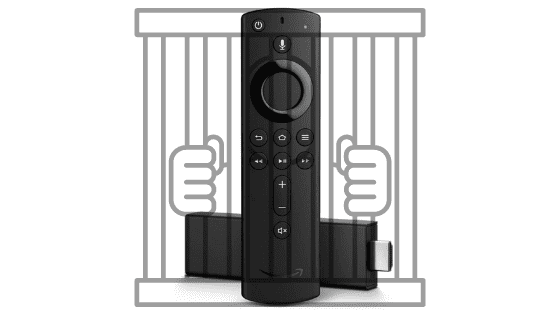 When I first bought my Amazon Firestick, several friends insisted that I “jailbreak” it so I could gain access to tons of free content. They were all watching movies still in the theaters on their jailbroken Firesticks, and streaming live TV, for free!

While it sounded pretty awesome, I was a bit skeptical. My first thought was, “has anyone gotten in trouble using a jailbroken Firestick?” So I started doing my own research, and here’s what I found.

No one has gotten in trouble for using a jailbroken Firestick, but that doesn’t mean it’s safe. While jailbreaking a Firestick is legal, streaming copyright content with it is illegal (up to five years in prison and a $250,000 fine). That said, historically law enforcement has gone after distributers, not end-users.

Basically if you’re just streaming content and not hosting it, or making money streaming it (“commercial streaming”), you’re most likely safe. For now.

What does it mean to jailbreak a Firestick?

The term “jailbreak” sounds mysterious, but it’s a pretty common practice in tech that simply eliminates the software restrictions imposed by a device.

It allows you to install apps, extensions and other software that wouldn’t normally be permitted by the factory default version.

In the case of the Amazon Firestick, jailbreaking allows you to install apps and extensions that aren’t available in the Amazon App Store.

Sounds great, but is it legal?

Is jailbreaking a Firestick legal?

Yes, jailbreaking a Firestick is completely legal. Technically it falls under “Fair Use”, as is documented in a 2018 revised version of the Digital Millennium Copyright Act (“DMCA”).

In years past, companies argued that jailbreaking their devices should be illegal because modifying the operating system “leads to the creation of an infringing derivative work that is protected under copyright law.”

Basically the argument was, if you let people mess with our proprietary software, it will eventually result in a competing product.

It makes sense why these companies had this stance, they wanted to keep their walled-garden in tact.

But unfortunately for them, exemptions to the DMCA are considered every 3 years, and in 2010 Congress determined that certain “jailbreaking” practices qualified as exempt under this law. Since then, additional jailbreaking exemptions have been added to the list, including streaming devices.

But just because jailbreaking a device is legal, doesn’t mean it’s safe.

Is jailbreaking a Firestick safe?

Amazon spends a lot of time and money ensuring that the Firestick is secure, and that their App Store only contains apps that are safe and secure as well.

As soon as you jailbreak your Firestick, the operating system becomes vulnerable.

For example, if you start installing apps outside of the Amazon eco-system, those apps could be carrying malware designed to steal your personal data.

Furthermore, apps outside of Amazon’s App Store usually aren’t optimized for your device and can lead to your Firestick freezing/crashing, and other major stability issues.

Another risk introduced when you jailbreak your Firestick is a lack of software updates.

When you jailbreak your device, your Firestick stops getting these software updates.

Streaming content just means watching or listening to content that isn’t fully downloaded to a device. When you stream, you’re using the internet to get the content, but the content itself lives on a separate computer or server.

When you pay for a streaming service like Netflix, Hulu, or YouTube TV, of course it’s legal to stream.

It’s when you start using an internet connected device to stream illegal content where things start to become an issue (i.e. the owner of that content that has not given you permission to use it, and the content is covered by copyright law).

To be clear, using a jailbroken Firestick to stream copyright content is illegal. This is considered criminal copyright infringement and is technically punishable by up to five years in federal prison, with a fine of $250,000. This includes infringement without monetary gain!

But the reality is, if you’re at home with your wife and kids, and you stream a movie illegally, you’re extremely unlikely to face any consequences.

Streaming can also constitute a copyright violation when users create a “public performance” of unauthorized work, or show the streamed content to a large number of people (according to the Copyright Office).

For example, if your local bar uses a jailbroken Firestick to stream a pirated movie, and they advertise the movie night to attract customers. That is definitely illegal, and more likely to catch the eye of law enforcement.

But outside of “public performances”, streaming videos online, regardless of the website, goes largely unpunished.

It’s far more likely for government agencies and the media business to go after people who download and redistribute content on a large scale, for public consumption and commercial gain.

The Protecting Lawful Streaming Act of 2020

In fact, the US government is so determined to crack down on those trying to profit from illegally streaming content, that they passed a new law in 2020.

This law significantly increases criminal penalties for those who, “willfully and for commercial advantage or private financial gain, illegally stream copyrighted material”.

Previously, illegal streaming for profit was treated as a misdemeanor. Under this new law, the DOJ can bring felony charges against providers (as opposed to users) of such illegal services.

The message here is clear, if you’re going to illegally stream content, you better make sure you’re not profiting off it!

People getting into trouble over jailbroken Firesticks

After hours of research, I couldn’t find a single example of an individual United States streamer getting in-trouble with the law.

The closest example I could find happened in the UK where around 240 individuals were arrested and fined for subscribing to a service that provided them with a one-stop-shop for several popular streaming services: Netflix, Sky, Amazon Prime Video, Mediaset Premium, and Dazn.

But paying for an illegal subscription isn’t really the same thing as using a jailbroken Firestick to stream illegal content.

Every US story that comes up in regards to streaming and/or jailbroken Firesticks has to do with folks trying to make money.

What’s interesting about that last example is the Sheriff on the case said publicly that, “any consumer caught using one (a jailbroken Firestick) in their home would face a misdemeanor”.

But this sounds like more of a scare tactic than an actual threat to me.

I mean how likely is it that the Sheriff is going to use his department’s resources to knock on doors and hand out misdemeanors to jailbroken Firestick users? Don’t they have more important work to do?

Anyways, the good news is that 99.9% of people aren’t trying to make any money with their jailbroken Firestick, they just want to stream content in the privacy of their homes.

And by-in-large, those people won’t get into any trouble.

Using a VPN with a jailbroken Firestick

Most people who jailbreak their Firestick, set it up with a VPN. VPN stands for Virtual Private Network.

When you use a VPN, your IP address becomes hidden from websites and other search engines that are trying to collect your information. With your IP address hidden, you can’t be identified or tracked like you could if you just used the internet without a VPN.

The piracy watchdog groups that sit around watching pirated data leave a server, travel the internet and land on your IP address, will have a much harder time tracing the location of your IP address when you’re using a VPN.

So using a VPN with your jailbroken Firestick is strongly advised, especially if you’re considering using it to stream illegal content!

Jailbreaking a Firestick is 100% legal.

Things quickly become illegal when you use that jailbroken Firestick to stream stolen content. Violators can technically face up to five years of prison, with fines up to $250,000.

The good news is that, as far as I can tell, no one has gotten in trouble for using a jailbroken Firestick.

The only time people seem to get in trouble is when they use jailbroken Firesticks, or streamed content, to make money.

If you’re just looking to stream content with your jailbroken Firestick in the privacy of your own home, you’re most likely safe to do so.

All things considered, I personally don’t recommend jailbreaking your Firestick. It’s just not worth the risk.

But if you still want to, I would highly recommend that you use a VPN whenever you stream content to hide your IP address from prying eyes.